On-air retirement announcement of Steve Beverly as TV voice of the Union University Bulldogs and Lady Bulldogs after 25 years at the mike:

So to you…..my friends at home…..this is a personal word to close out this telecast.

Ending a season is never easy because seniors graduate and we won’t see them again on this floor. Seniors also graduate from our broadcast team that brings you these games.

We’re losing our senior producer and director Thomas Gray to graduation at the end of this semester. We will indeed miss Thomas and his leadership. I’m also grateful to our entire crew whose names you see at the end of each Bulldog telecast because they are the ones who make the engine run for Union basketball on TV. 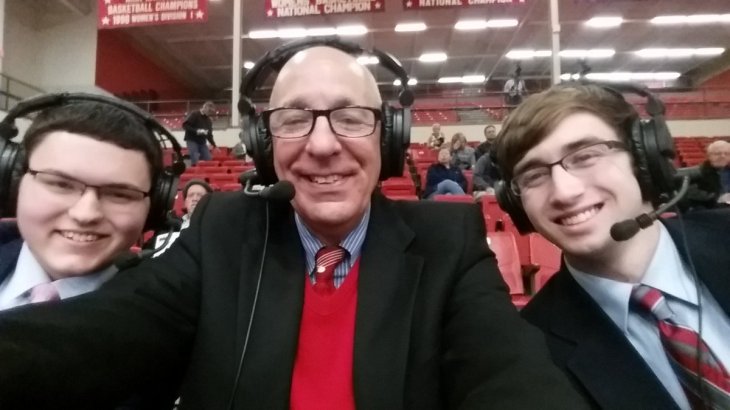 Today brings down the curtain on 25 years of these regular visits with you as I’ve attempted to tell the stories of the Union Bulldogs and Lady Bulldogs and their many adventures on this basketball court that now bears the name of The Legend himself David Blackstock.

When I started, I still had a fairly thick…if declining head of hair…..and I was a young fellow of 38. I’ve somehow endured through five American presidents and three Union presidents.

I remember the morning Coach Blackstock called me at my home and asked in that distinctive accent of his, “Can you call our basketball game tonight on TV?”

He said without a beat: “Then you’re well qualified.”

Occasionally…..I’ll go back and watch the VHS tape of that game I did with former coach Brice Bishop. It was Union vs. Lambuth. I have no earthly idea why they had me back to do a second game.

Somehow….they were patient and for some reason known perhaps only to our Lord, I’m still here. 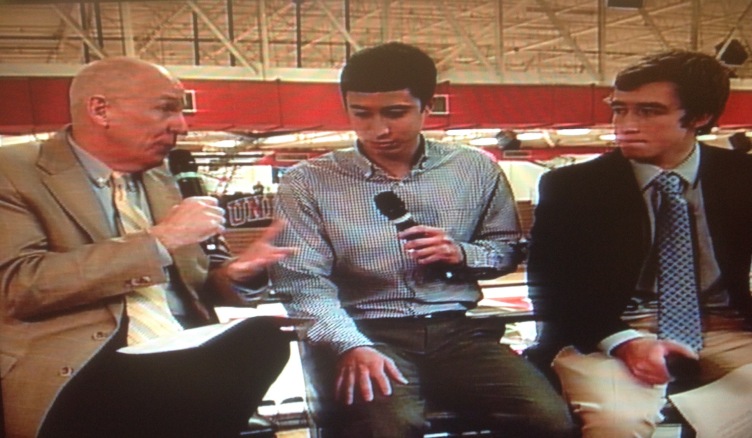 In these 25 years, I have had the great joy to work with some wonderful people…..outstanding coaches in Mark Campbell….Dave Niven….the unpredictable Ralph Turner…..our beloved Lisa Hutchens—who left us much too early—and The Legend himself. I’m especially pleased that despite his recent health issues….
Coach Blackstock has been less than 10 feet away from me at a number of games this season.

His successor as athletic director Tommy Sadler has been enormously supportive of all of our efforts to bring television coverage to you at home…..and you who watch online.

Doing Union Basketball on TV would not be the same without the familiar faces of my good friends Don Richard….Carlo Spencer…..and Josh Simmons at the other end of this same table.

You can go across America and not find a finer sports information director than Steven Aldridge….who could be an S-I-D at any Division 1 program in America but Steven has chosen to make his home here and I’m glad he has.

I’ve also had the rare privilege of having a colleague who has become a great friend in the Hall of Fame radio voice of the Bulldogs Gerry Neese….one of the finest men I know anywhere.

In these 25 years….I’ve had the joy of mentoring more than 120 different student commentators who have joined me at the mike. Some of them….including Jonathan Huskey, Philip Tang, Steven Williams and Adam Wells have gone on to excellent sports broadcasting careers of their own. My first woman analyst….former Union All-American Lee Nunamaker Pipkin….is a talented coach in her own right and has a state championship trophy at Chester County.

I’ve had so many personal thrills and memories that I can’t begin to list them all. However….the 1997 TranSouth conference championship game on this floor when Michelle Street scored a Union record 45 points in a double overtime win over Freed Hardeman is still my favorite thriller.

Right up there were the nights when David Blackstock in 1998 and Mark Campbell in 2005 won their first N-A-I-A national championships at Oman Arena. I had 13 wonderful years as the TV voice of that great women’s tournament. Five of those years….I called Union taking home the banner as national champion. Many broadcasters go through an entire lifetime without a chance to call a title game of any kind. For that, I have been especially proud and humbled. 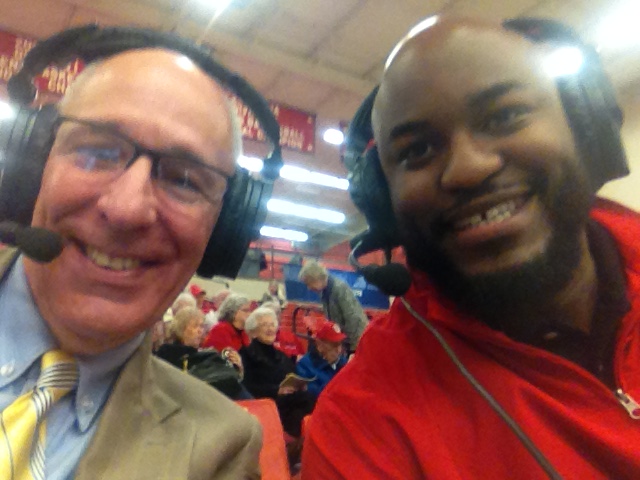 One of America’s finest broadcasters is Tim Brando. I’m proud that he has become a friend and mentor to me in recent years. Tim has reminded me several times never to minimize the importance of the role of a broadcaster at the N-A-I-A or N-C-Double-A Division 2 level. “Somebody has to do those games,” he told me. He also said, “Always remember that when you call a game, it means as much to those kids as it does to any kid at the Division 1 level.” That’s why I’ve always tried to give my best at this microphone. It’s these young people who matter most.

A difficult challenge for any sports broadcaster is to know when it’s time. In recent months….we’ve seen the legendary Verne Lundquist and Brent Musberger put a final bow on their storied careers.

The tough part is how to avoid hanging on too long. No broadcaster should hold onto a seat just for the sake of longevity…..but it’s a struggle to know when to say when.

A few weeks ago after our TV doubleheader on January 12th, for a variety of reasons, I knew it was time.

Ultimately, after a lot of discussion and prayer…..I made the decision to retire as the television voice of the Union Bulldogs and Lady Bulldogs effective with the end of this broadcast.

It’s not necessarily the time I want to hang it up. I feel healthy enough and I could probably go on another couple of years.

But several circumstances have led me to the conclusion that I can no longer deliver in this role at a standard that I feel is my professional best. A number of reasons have led me to that evaluation…..some of which will remain personal.

To continue in a fashion where I cannot do my best would be unfair to the athletes whose exploits I have described for a quarter of a century……to Union University……or to you, the viewers.

I will miss the visits that we have had together these 25 years…..but the increasing pressures and responsibilities required to prepare these broadcasts and some related circumstances have compromised my ability to perform at a level that I feel is acceptable.

I will continue to see you as a commentator on Jackson 24-7……and on our weekly Saturday and Sunday night excursions into the world of TV Classics on TV6.

I’m extraordinarily grateful that you at home who have watched us regularly over these years have accepted me for as long as you have…..and been kind enough to forgive my many mistakes and my rather unorthodox humor.

It’s a relationship I value and will always treasure as a golden memory.

I’ve truly enjoyed our visits in your home and I sincerely hope all of you will continue your support of the Bulldogs and Lady Bulldogs—-on television and in person.

I hate long goodbyes—-so I will close this one out by simply saying…..for the 610th and last time at this microphone—–this is Steve Beverly saying, “God bless you….and so long…..from the great Hub City of West Tennessee!”